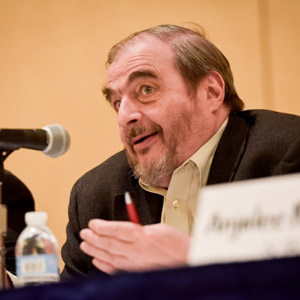 Nancy Fatemi, our wonderful former Executive Director, wrote a lovely tribute on the passing the passing of Nick Acocella, the founding editor of Politifax, the quintessential New Jersey political report. Nick passed away on June 20th at the age of 77.

Nick Acocella will always hold a special place in our hearts and we will miss him greatly. Nick was someone so full of life and of love for New Jersey that it was catching and one did not dare say anything negative about the Garden State in his presence without getting swiftly corrected.

In his Politifax columns, Nick always referred to us as New Jersey’s merry band of expats in the Nation’s Capitol. We were grateful for his weekly newsletter, which we subscribed to for over 10 years, because it was a great way to keep on top of what was happening back home.

Not many people could synthesize a week of New Jersey politics, including county and municipal, into four small pages. And we were always proud to have an event of ours listed as the Event of the Week. Nick was an encyclopedia of knowledge and whenever we needed to make a decision that could have some political sensitivity back home, we knew we could get a sound recommendation from him.

Ten years ago today, Nick came down to DC to speak at our first NJ Politics & You reception at the Stewart Mott House. At that event, the New Jersey State Society presented him with a portrait done for us by retired Star Ledger editorial cartoonist Bill Canfield. We had asked Bill, who was in his late 80s at the time, to create a portrait that would depict Nick as a hard core reporter who spanned the old typewriter/rewrite journalism and the new digital journalism (the latter of which Nick did not seem to welcome all that much!).

We made sure his baseball books were also in the scene. Nick loved the painting, with its desktop computer on one side and an old Underwood on the other, and he displayed it on his wall near the kitchen where he taped his cooking series, Pasta & Politics. Nick, count us, your merry band of expats, as among those who will never forget you, your warmth, your enthusiasm and even your sometimes crusty demeanor, which made you all the more genuine and beloved. And thank you for all the wonderful things you did for us and for our great State of New Jersey.